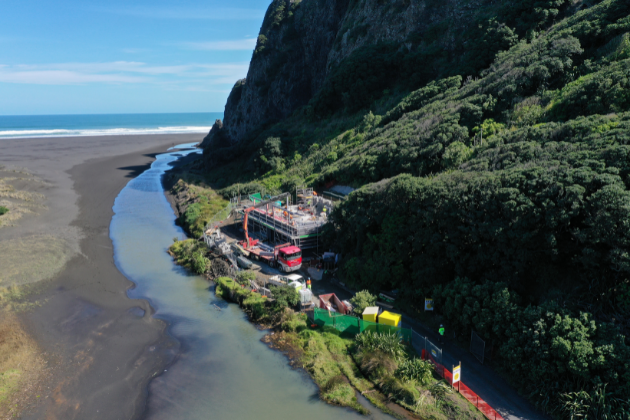 This article was written by Anne Gibson and originally appeared on the New Zealand Herald online newspaper and has been reproduced in part with their permission.

A west Auckland surf club headquarters with rotten timber and a rusting iron roof has been demolished and replaced by new $3.3 million premises due to open in July.

Matt Wade, club captain of The Trusts Karekare Surf Life Saving Club, said the new building was the first of seven club upgrades planned across the region in the next 10 years.

Karekare’s rip-torn black sand beach which featured in the film The Piano has an increasing number of visitors and more pressure was on the club to provide services.

The relatively recent installation of a surf cam has also seen a higher number of surfers taking the winding road down to beach.

A 106 Architects project, the final inspection of the new Karekare Surf Lifesaving Club is Thursday, 17 June 2021. It’s been an epic community journey to get to this point with a project commitment since 2002, and with a huge community funding drive to achieve the funds needed!