Auckland Marathon – Our Own

It was the Auckland Marathon on Sunday and two of our own participated. Joss our office manager walked the half and Paul in the architecture team ran the full marathon! Big congratulations are in order to both on completing this mammoth achievement. Post run we sat down with Paul to gather some more insight into the big day, behind the scenes preparation and what it took to get over the line.

Why did you decide to participate in the Auckland Marathon?
Running has always been a way that I have dealt with the stresses of life. I love being able to hit the streets, clear my head and appreciate the beautiful environments that I often take for granted. Running has also been a way for me test my endurance, a tangible achievement that gives me confidence to tackle other challenges that I face. After doing two half marathons previously, in Wellington and New Plymouth, I thought this was a good way to push myself even further. My Mother had done one a few years back too, which was also pretty motivational.

What did you do to prepare for the Auckland Marathon? Any tips for next years contestants?
Really the only way I have found to become better at running is to run a lot. I made myself a 14 week program which I tried my best to stick to. Personally the goal was to finish rather than reach a strict time target. My priority in training was to maintain the enjoyment and stress relief I gained from running. I achieved this through more of a slow and consistent progression, running with friends and in nice conditions whenever possible, rather than a gruelling routine. 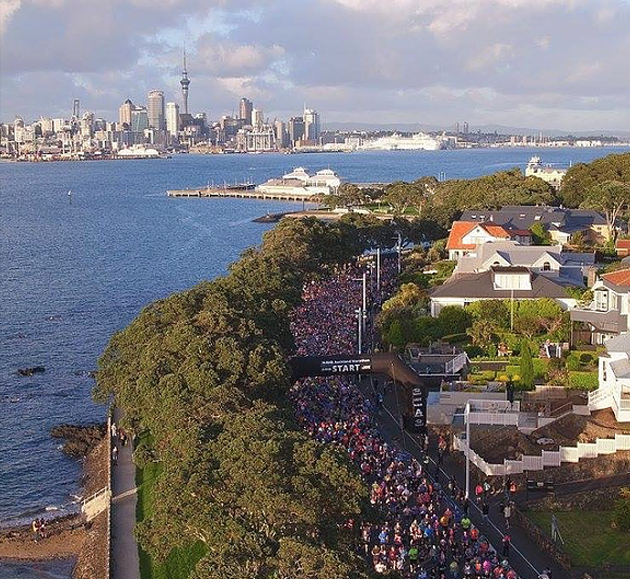 Tell us a little bit about how you found the day? Highs and lows (excuse the pun) or the highlight of the day?
I was quite nervous going in. The longest training run I had done was only 36km’s and that wasn’t a walk in the park. But the event was organised very well with clear instruction and little things were done to make it enjoyable. I guess the main draw to the Auckland Marathon is the bridge crossing and with the sun rising and drummers at the base cheering you on, it really was a special moment at the top. Unfortunately with all my adrenaline, I had charged full steam ahead and neglected the pace that I was trying to stick to. This made the second half of the course a significant slog as my legs promptly giving up. However with the encouragement of my friends along the way I was able to push through.

How did you feel crossing the finish line?
I really wanted to finish strong so I used all my energy left to sprint the last km or so. The whole experience was really fulfilling. It was also really encouraging to see the diversity of contestants and relating with their accomplishments.

What’s next in store for you?
I’ve encouraged some of my flatmates to have a go at the Omaha beach half in a few weeks. So if they’re up for it I’ll join them for that. The course looks really nice. Maybe I’ll try my hand at trail running too, summer is here and it’s time to explore.

Congratulations again to both Paul and Joss and everyone who participated in the half or full marathon.