This article was written by Justin Foote and originally published by AGM and Urbis magazine, 23 November 2015.

The transition from medal-winning hockey player to registered architect may have taken a few years, but, as Dion Gosling tells Justin Foote, flexibility in all aspects is the key to success.

Urbis: You set up Studio 106 in 2009, is this your first foray into working for yourself? 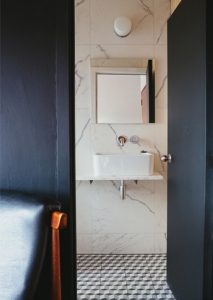 Dion Gosling: During my sporting career I did contract work for the flexibility it offered. That gave me the opportunity to work on a whole range of projects. There was a connection between sport and architecture initially. Then there was a transition to doing retail and a bit of commercial or office buildings relating to those sports-aligned organisations. Through those networks, the residential commissions started coming in.

Urbis: How would you define your architectural practice?

DG: I wanted to create an environment that was really flexible. We’ve ended up with quite a flat organisational structure and, being small, we can work that way. It’s been positive for everyone’s interest, rather than getting stuck on one project. That collaborative approach is also something we take forward into our larger sports-related projects where we pair up, usually, with a local practice and deliver it together.

Urbis: In terms of the residential work you’ve done, has that been primarily Auckland-based?

DG: We’re doing a lot of villa work in the inner-city area as well as a renovation in St Heliers. We’ve got a two-stage new build in Taranaki, also, so there’s a bit of a mix. The other work we do – the sports stuff and the like – is nationwide. We’ve become quite adept at remote delivery.

Urbis: How is renovation design changing? Are we moving away from the contemporary box on the back of the villa? 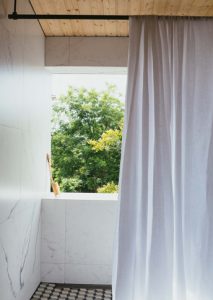 DG: I think there’s more consideration of context. Our St Heliers project, for example, where we’re working with one in a row of three units – that project is all about peering through the surrounding building stock to open up the views. We set up the idea of moving through the house, and what you experience as you move into some common areas and how you create multiple uses out of individual spaces. Is it just a hallway or can it be a playroom as well? What other purpose can these spaces serve?

Urbis: In a rural setting, where views are not an issue, do you find you tend to design something more enclosed?

DG: It’s about a sense of scale and intimacy. In Taranaki, we just did a simple box with a low-pitched roof and large eaves. Glazed walls and set-backs meant we could open up the view from the courtyard to look right through the open-plan living area, giving the client that connection to the outside while still having an intimate space that was protected from the wind.

Urbis: What’s the process for you when working with a residential client?

DG: It comes down to understanding what the homeowners’ rituals are and what their daily patterns are and how they might use the space during the week versus the weekends. We use cardboard models as a part of that process; it’s amazing what that can do for understanding. It really facilitates discussion, you can remove walls if you want to and, at that initial concept stage, it doesn’t feel as fixed as a computer render might. I’m a big believer in using models.

Urbis: Do you find being able to look at a 3D model is beneficial for the client?

DG: Absolutely. There’s a lack of preciousness at that stage, when ideas can still be tested. Once it sinks in that it’s a collaborative process and that everything is up for grabs, is when you get true results.

Urbis: In terms of spaces such as kitchens and bathrooms – the rooms that get updated the most – how do you ‘build in’ an element of future proofing? 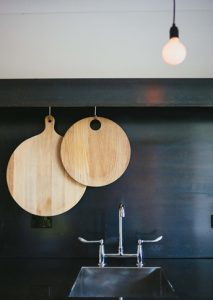 DG: The key with those rooms is the experiential aspect of them – the bathroom, in particular. When you enter a bathroom you want it to be a place of rest, almost like an interior oasis. We recently undertook a renovation of a 1960s townhouse. The idea was to go back to a simple shower curtain, but then you get that awful image of a mouldy plastic shower curtain.

So we looked for something you could draw open and which would dry easily. We ended up with a piece of linen that we just looped over the rail and is really easy to wash. We incorporated sauna spruce – a contemporary way of getting some warmth into the space.

With the kitchen, it’s about connection to other spaces and to the outdoors. Gone are the breakfast bars that seal off the living or dining room, and those awful corner cupboards – both of which were supposed to be about added functionality, but I’d argue how true that was in reality.

We’re seeing a trend towards the galley kitchen as a means to open up the spaces and improve the social flow around the kitchen. That’s not to say that the current mode of thinking won’t change; but certainly the ability to connect more spaces, rather than having the kitchen as a barrier, really makes sense at the moment. Also, a kitchen that is simple and functional and not too precious is a big part of future-proofing.